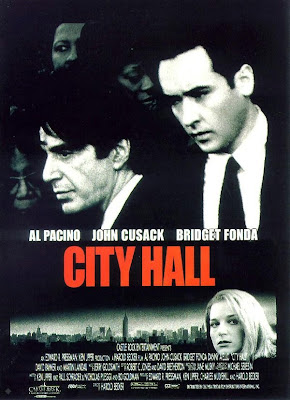 Hosting by John Cusack and Al Pacino, City Hall should be a film worth of expectaion.
Still I don't know why but from the very beginning of the movie, I kinda of feel that
it might not sell very well ultimately.
I am not sure about its sales amount for certain,yet I just cannot buy the combination of the two leading actors.
Sure! Both of them are successful and well-known performers, winning lots of important awards.
But,
they just don't fit each other.
I have no problem about Al Pacino playing the role of the mayor of NY City with ambition to compete
to be the future candidate of U.S. president.
The problem comes from John Cusack, I think... 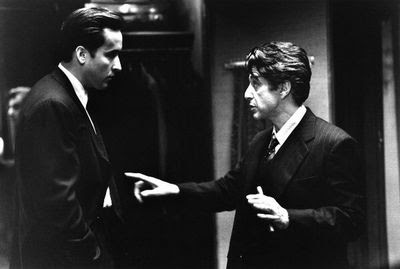 I don't believe in him!
He plays as a faithful vice mayor who not only respects the mayor but handles almost everything him.
I am sorry!
probably due to the strong impression from other movies,
I keep thinking him as a rebel who would eventually causes the downfall of the mayor
(he did, indeed! But in a justice way...)
The two cann't play together for both of them carry a sense of ambiguity, kinda of in-betweenness.
Like what Al Pacino mentions in the end of the movie that they are the people with "gray" color on them.
that is, they have to swing between black and white, right and wrong, true and false.
And it is never easy to play that role.
to live on his words, the mayor helps his friend to buy off the judge, leading to the innocent death of several people.
On the other hand, John Cusack the young, go-for-it, politician is not willing to follow this kind of life philosophy,
determining to unmask the truth.
Sounds like a fair character,right?

Iif this is the case, I think Keanu Reeves would be a better choice instead of John Cusack.
The latter should play that kind of character with the flavour of nervous.